Ecuador -- for us, the right place at the wrong time.

We have decided to un-retire.   We are going back to the United States, perhaps permanently, perhaps not.  There are more opportunities for us to do what we do there than there are here.  We want to go back to work.  I want to teach again -- really teach, in daily contact with students.  Ray wants to build again using materials with which he is more familiar.

Oh, we thought we were through.  I had been a university-level professor for more than 30 years.  Ray had built house after house.  We wanted a change. We got the change, and the change has been, for the most part, good for us.  And we have been very happy here.  We own a beautiful 8 hectare property in the country.  We have friends and plenty of things to do.

But we are going back.

Retirement has been a trap for me.  I don't like it.  I was one of those lucky people who found a career that fit them perfectly.  And in the US I can do that again.

We like Ecuador a great deal. It has been a wonderful, rejuvenating time.  The weather is perfect.  The people are, for the most part, wonderful. But, as I said, right place, wrong time.

And Ecuador will be going through some changes of its own.    I wish the country, and its residents, well.

I would like to end by thanking Mary and Steve, of South of Zero, for including DocBop and Alpha Dog in their blog roll.  Keep up the good work!

Take care and be well.

The Importance of Change

This is not a philosophical treatise on the nature of change.  This is about change -- coins, to be exact.

Coins are important here.  The clerks in the stores always ask for exact change or as close as possible.  The other day, I was shopping at Gran Aki (part of the SuperMaxi family of stores) and spent $11.86.  I had a $20 bill and a lot of change -- I automatically gave the clerk $21.86.  The first or second time I shopped there, the customer ahead of me paid with $10 worth of dimes -- not in coin rolls, either.  The clerk thanked the customer profusely. Can you imagine what would happen in a checkout line in the US if that were to happen?  Actually, I've seen what happened in one case in a store in Springfield, Missouri: The clerk sent the customer to one of those coin machines at the front of the store.  The man wasn't happy about it; he had just enough to pay for his purchase and if he had gone to the coin machine he wouldn't have had enough.  Another customer stepped up and paid for the man's groceries (under $5, as I recall).

The buses in Cuenca cost 25 cents a ride.  You can use a quarter, two dimes and a nickel . . . I've seen people hand the driver 25 pennies.

At our local bakery, rolls are 12 cents each.  When I buy two, or four, and pay with a quarter or a half dollar (when was the last time you saw a half dollar in the US?), I tell the clerk to keep the change because I know that she will probably be short on pennies.

The owners of the little stores around here are always in need of change.

Ecuador uses the US dollar as its currency.  If you want to know where the $1 Sacajawea coins are, they are here.  Although there are dollar bills around, they are dirty and torn, often, and there have been times when a cab driver or store clerk refuses to take them.  I have learned to appreciate the dollar coin.  In fact, I wouldn't be averse to having all bills converted to coins.

For denominations of a dollar or more, US coins and bills are used exclusively.  For half-dollars and less, US coins are used, but Ecuador mints its own versions of them. They are interchangeable. Here is a picture of the Ecuadoran versions of the coins: 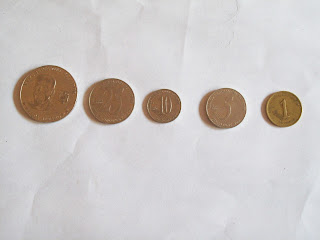 They are the same size as our coins but the metal composition is different.
So, when shopping in Ecuador, use cash, and make sure you have plenty of change.
Por favor, tenga un  año nuevo feliz, saludable, y próspero.
Please, have a happy, healthy, and prosperous New Year.
Barb
﻿
Posted by This Old Man at 9:31 AM 5 comments:

One year in Ecuador

On Dec. 1, 2010, we got off the plane in Cuenca, with our four suitcases, two computers, and two backpacks.  We are a year into our adventure, and it isn't ending.  We progress.  I've had a stumbling block or two along the way, but I am adjusting to being right-eyed, after five months, and I'm starting, I think, to come out of the funk I've been in.  I'm not sure Ray would agree with that, but I feel I am.

I like it here.  As I read about the bad weather in the US, both summer and winter, I rejoice in the moderate temperatures year-round.  We have had quite a bit of rain this year but no snow, no debilitating humidity, no tornadoes (thunderstorms, yes, but no tornadoes).

I will teach online for one more semester, and, at the end of that time, I'll move to LaPaz.  Ray has promised that the addition to the guest house will be finished enough by then.  There will be painting and stucco work to do.  I'm investigating internet services for us to use up there -- no wired internet there!  But it is so quiet, compared to Cuenca; that will be great.

My latest project is to start investigating the native animals that are likely to be found in our area.  I'm particularly fascinated by the spectacled bear (Andean bear), the only species of bear in South America.  It is somewhat smaller than North American bears, forages in the daytime, and is endangered.  I doubt we'll see one, because they stay away from other large animals, including humans. I'd like to see one, though.

I obtained that picture from the web.
My particular interest (I'm an animal behaviorist by trade) has always been mammals, but I'll be investigating the birds and reptiles of the area, too. We've seen deer tracks, and Digger flushed what looked, to Ray, like a small white-tailed deer.
Of course, I plan on a Galapagos trip.
As my research goes on, I'll be writing you about it.  I am, although retired, a university professor and I can't keep myself from lecturing, I guess.  I'll try not to bore you.
Until next time, be well.
Barb
﻿
Posted by This Old Man at 5:32 AM No comments:

It is holiday week in Cuenca, and there are hundreds of things to do around town.  Today I decided to go to the IX National Fair: Handicraft Excellence Fair, held at CIDAP at Hermano Miguel and Tres de Noviembre, right on the river next to the Escalinata.  There were artisans from all over there -- jewelry from Lima, Peru, for example: 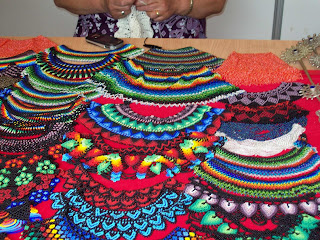 But of the dozens of vendors there, I liked the work of two the best; both are from Cuenca.
My brother is a ceramicist, and as I go around the city I look at ceramics and pottery quite often.  At the exhibition, there were many examples of pottery, but I was particularly taken by the work of two young potters, Ivan Webster and Natalia Carrasco, of Valle Fuego.  Here are some examples of their work: 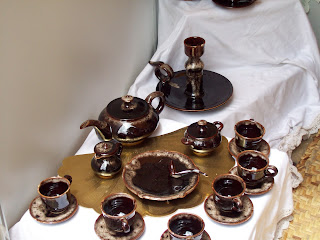 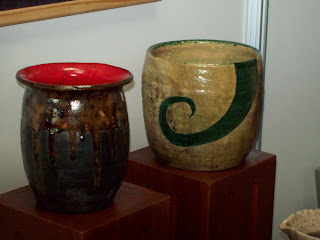 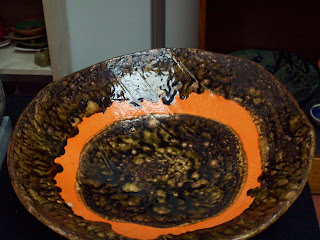 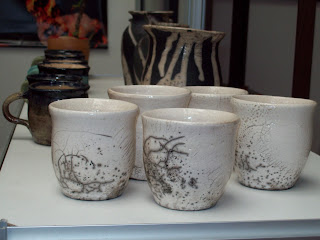 As you can see, they do decorative and utilitarian pieces -- all creative and beautiful.
The other artisan I was taken with was Jhon Moyano Jimenez, of Arte en Hierro﻿.  He makes art from recycled materials, particularly from iron (the "hierro" in the name of his shop). 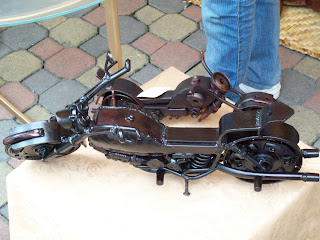 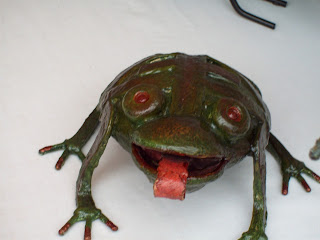 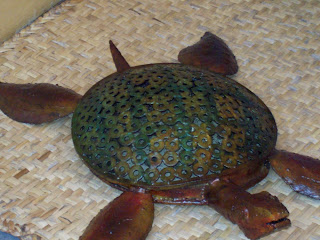 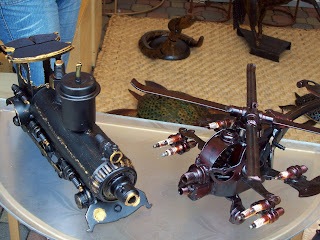 I have to say that I like the frog the best, but everything was well-crafted.
There was so much to see and do.  In addition, all along Doce de Abril there were dozens of vendors, on both sides of the street, selling about anything you can think of. If you come to Cuenca during the first week in November, be ready for all the activities.  The feriado is wonderful!
Until next time (and I hope it won't be two months from now), be well.﻿
﻿

For those of you who asked . . . the infection in the retina of my left eye was worse than expected.  I have had no improvement in vision, after two and a half  months.  I doubt there will be, although my doctors won't say that explicitly.  I have had laser treatment on my right eye, and it's doing well (except I need a new prescription).  I have been getting great treatment; what happened was an accident, of course.

For those of you who asked . . . the new puppy's name is Digger.

Until next time, be well.

Barb
Posted by This Old Man at 2:36 PM No comments:

We finally got our puppy.  We got her at the Clinica Amigos Fieles on Juan  Montalvo in Cuenca.  Her mother was brought to the clinic -- where they take in stray dogs and cats -- pregnant.  Our puppy was one of a litter of six.  On the right, you see her out in La Paz, fighting with the grass.  Her motto is  "If it moves, I'll kill it."  She's also a digger.  Here she is in the sand pile. 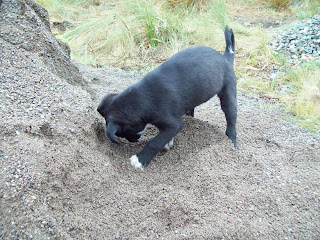 And here's a picture of her face. 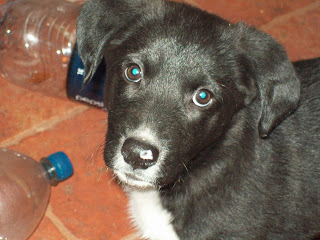 She and our cat are still working it out.
We haven't settled on a name yet -- there are several options on the table.  But we're happy to have her; we missed having a dog.
Un﻿til next time, be well.
Barb
Posted by This Old Man at 1:27 PM No comments:

A Day in the Country

I hadn't been to our place in La Paz for a while -- in general, Ray stays there for a few days at a time while I stay in Cuenca putting drops in my eyes and, most importantly, letting the cat annoy me.  Today, we decided to go up for the day.  It was a beautiful and peaceful day, and I enjoyed it very much.  Ray did a little work on the footer for the addition and tried out a stucco mix for the walls; I sat in the sun with my sunglasses and hat protecting my eyes.

I did take some pictures of the wild plants that grow on our property.  I don't know the names of them, but they are beautiful. 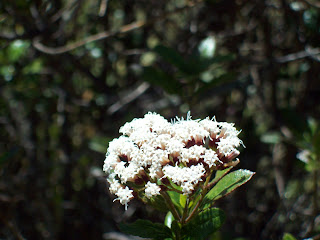 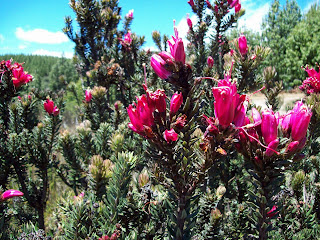 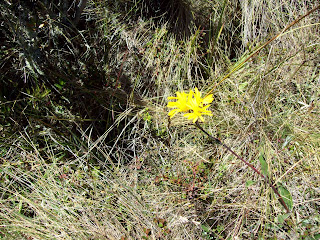 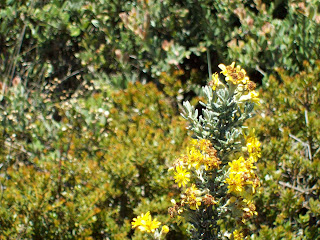 Next time, I'll go across the creek and take some pictures from there.  The cold weather we've had for a while seems to be ending, and I'm sure more plants will bloom.
Until next time, be well.﻿
Posted by This Old Man at 2:13 PM No comments:

Check out my construction projects in Ecuador 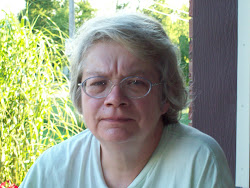